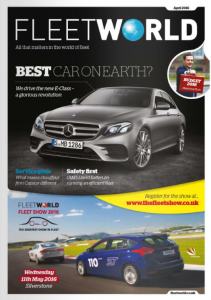 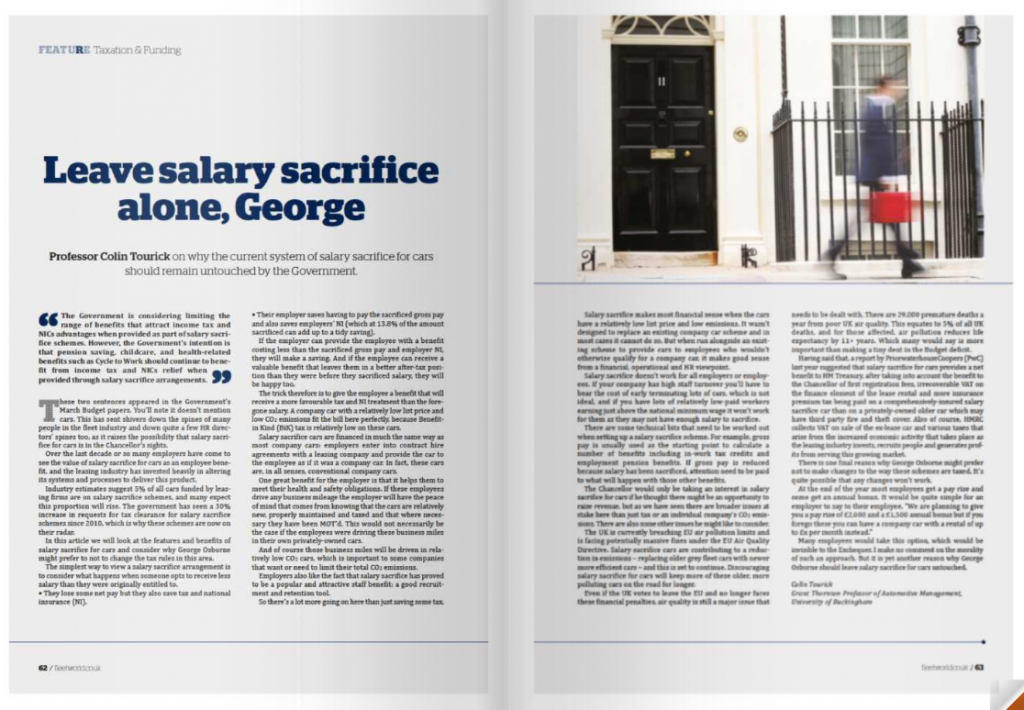 I understand that Treasury officials are embarking on a review of the future of business car taxation, no doubt in part because the new lease accounting rules will in due course place operating leases (contract hire) on lessees’ balance sheets. Presumably at some stage a file will be popped onto your desk proposing changes to the current arrangements.

This note represent no more than the thoughts of one humble citizen that you might like to consider before signing off any changes.

Every student of accountancy is taught about the “Canons of Taxation”, which were first espoused by Adam Smith in his book An Inquiry Into The Nature And Causes Of The Wealth Of Nations, one of the fundamental treatises on capitalism. Smith said that to in order to be good, a system of taxation should meet four tests, or canons. It should be fair, certain, convenient for the taxpayer and economical to connect.

Adam Smith would no doubt have had quite a lot to say about the way tax is currently charged on business cars. In some regards the current systems stretches fairness and certainty to the limit, so perhaps now would be a good time to put things right.

Fuel benefit tax is inherently unfair. 200,000 company car drivers pay this tax via PAYE. It is meant to tax the employee on the benefit they have received because their employer has paid for their private mileage. The problem is that it is payable in full even if the employer pays the cost of only one private mile in a year. In many – perhaps most – cases, the tax these employees pay exceeds the benefit of the free fuel that they are receiving. Please take the opportunity to fix this. At the very least, HMRC could provide guidance to employees to help them calculate whether they are actually receiving any net benefit. And prompting employers to review this area might also be helpful.

Company car benefit in kind (BIK) tax is designed to charge the employee for the benefit of having a car that is available to use for private mileage. This is a piece of cop-out language that governments have used for years to make life easier for themselves at the expense of the employee. For in truth an employee doesn’t benefit from having a car sitting on their drive at night, they benefit when they actually drive the car. However BIK tax charges the employee the same amount whether they drive 1 or 10,000 private miles per annum. Can this be fair?

There appears to be a disconnect between the government’s desire to encourage employees to take up low CO2 cars and the steep rise in the BIK tax that will be payable on these cars over the next few years. The driver of a car emitting 1-75 g/km of CO2 was taxed on 5% of the car’s list price last year and in four years’ time this will nearly quadruple to 19%. Is this rapid increase consistent with your government’s environmental credentials, and is it actually fair?

The U.K. is currently breaching EU air-pollution limits as set out in the 2008 Air Quality Directive, and the government is facing potentially huge fines from the EU. This is a very serious matter. It has been estimated that poor air quality causes 29,000 premature deaths each year in the UK. London has one of the highest levels of nitrogen dioxide and NOx emissions of any major European city, well over the approved limits. If you are going to change the tax system for business cars, you now have a golden opportunity to base it on one than one emission, including carbon dioxide, nitrogen oxides and particulates. The whole system – capital allowances, lease rental disallowance, benefit in kind tax, national insurance and VAT – should  reflect this. And leasing companies should be given first year allowances to boost the take up of zero emission cars.

One thing that was definitely unfair – and breached the canon of certainty – was the reintroduction of the 3% diesel surcharge. Company car drivers have been told for some years that this surcharge would be dropped and they would have chosen their cars armed with this knowledge. They cannot now do anything about this but just have to pay the extra tax until their three or four year lease expires. They have therefore been trapped into paying this extra tax which in most cases will have increased their BIK tax payable by more than 10%. Drivers choosing new diesel cars now can make an informed decision in the knowledge that the diesel surcharge has been reinstated, but drivers already driving diesel cars – i.e. most company car drivers – cannot do so. Therefore the rapid re-introduction of this surcharge was certainly unfair.

When you make your decision about altering the current regime, please bear in mind how important it is that the new system should keep people in company cars rather than encouraging the use of privately owned (“grey fleet”) cars for company business. Otherwise we will have a health and safety nightmare, companies will have an additional administrative burden and there will be a rush to introduce Employee Car Ownership Schemes (which always add a significant administrative burden).

Should you decide to change the tax rules as a result of the lease accounting changes, leasing companies will almost definitely have to invoke the “tax variation” clauses in their lease agreements, adjusting the rentals they charge in order to retain their after-tax margins. Most UK lease agreements contain these clauses. It would be really helpful if you would grandfather the tax treatment of any existing business cars and allow these cars to be taxed under the old rules until their leases expire. Please don’t ask the leasing industry to recalculate the rentals on 1.3 million company cars. This will add a significant burden to them and also cause hassle with clients, many of whom will not understand the tax-based discounted cash flow analysis the leasing company has had to use in order to recalculate the rentals.

You said in the Autumn Statement that you plan to look at salary sacrifice for cars. When you do so, please take a holistic approach and look at the totality of the system rather than just the income tax and NI calculation for an individual employee, because there is some evidence that salary sacrifice is a net generator of income for the Exchequer. If you were to adopt a holistic approach I think you would discover that most salary sacrifice cars are acquired for use by employees who would not otherwise be entitled to a company car and who have never bought a new car before. This transaction therefore generates a new car purchase that would not otherwise have taken place. The Exchequer benefits in a whole variety of ways from this transaction. The car manufacturer (or importer) and dealer pay corporation tax on the profit they make on the sale; VAT is collected on the sale; BIK tax is payable by the employee throughout the period they have they use of the car and NI is payable by both the employer and the employee. Salary sacrifice also brings a new car into the UK car parc, one that will almost definitely be greener than the one it replaces. In addition, there are significant benefits for the employer. They know that when an employee drives their salary sacrifice car for business mileage they are doing so in a modern, reliable, low CO2, low NOx car rather than an older, less reliable, high CO2, high NOx car. There is much more to salary sacrifice than meets the eye.

And one final request. Please have a look again at the system for capital allowances on business cars. It is currently quite possible that if a company were to buy a business car for a 25-year-old employee today and sell it after three years they will still have not received tax relief (capital allowances) on the full depreciation of that car 42 years later when that employee retires aged 67. This is bizarre, unjustifiable and therefore unfair. You could resolve it by the stroke of a pen by allowing companies to claim balancing allowances when cars are sold. And if you fancy boosting investment and economic activity you might also like to look at increasing the current levels of writing down allowance, which at 8% and 18% encourage nothing at all.

Professor Colin Tourick is the Grant Thornton Professor at the University of Buckingham Business School.