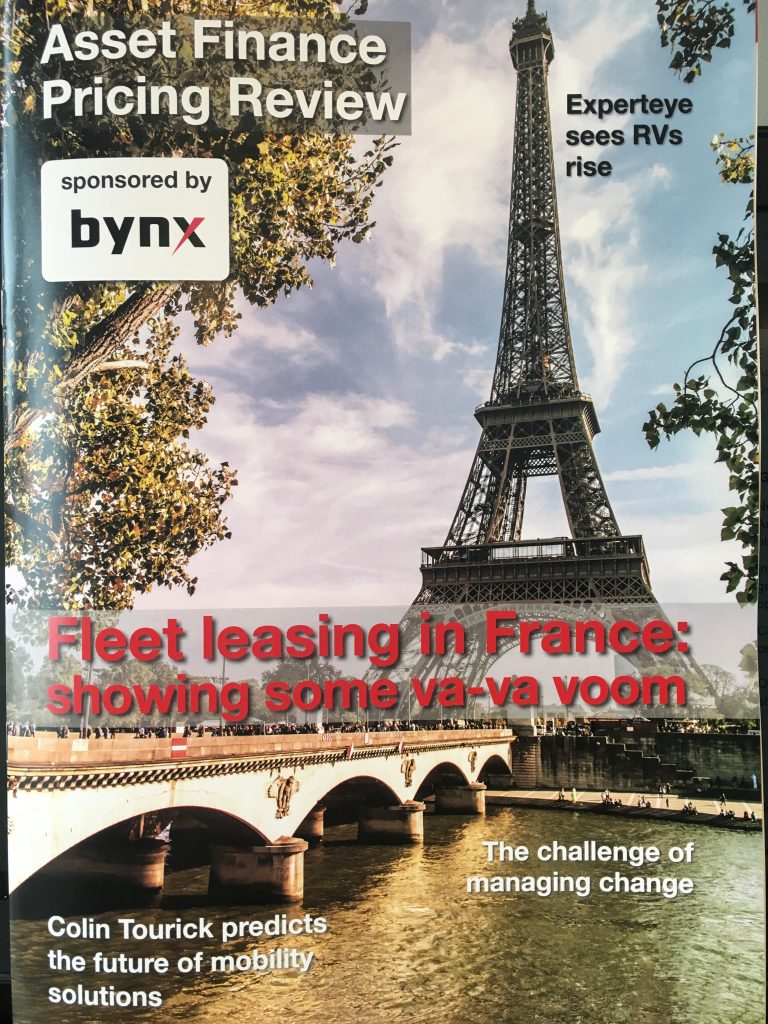 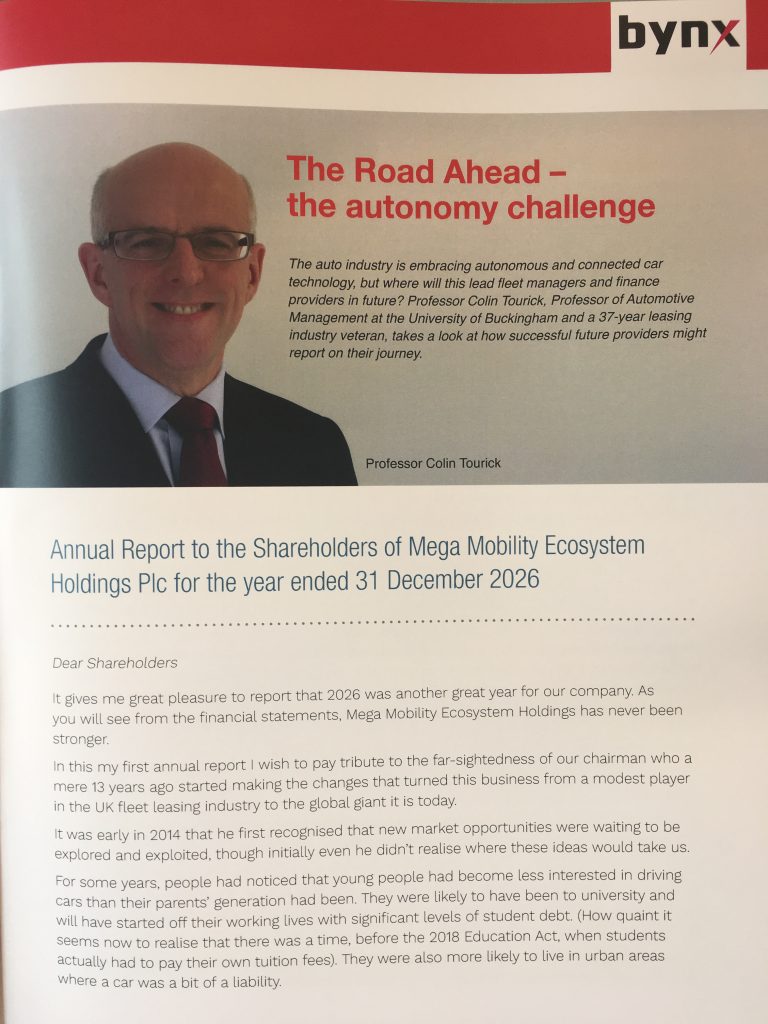 (as imagined by Professor Colin Tourick)

It gives me great pleasure to report that 2026 was another great year for our company. As you will see from the financial statements our company has never been stronger.

In this my first annual report I wish to pay tribute to the far-sightedness of our Chairman who a mere 13 years ago started making the changes that turned this business from a modest player in the UK fleet leasing industry from the global giant it is today.

In was early in 2014 that he first recognised that new market opportunities were waiting to be explored and exploited, though initially even he didn’t realise where these ideas would take us.

For some years, people had noticed that young people had become less interested in driving cars than their parents’ generation had been. They were likely to have been to university and will have started off their working lives with significant levels of student debts. (How quaint it seems now to realise that there was a time, before the 2018 Education Act, when students actually had to pay their own tuition fees). They were also more likely to live in urban areas where a car was a bit of a liability.

There was talk of ‘mobility management’ but not much actually happened; mostly it was just talk, though the Chairman noticed that the ‘sharing economy’ was also growing and that people were becoming more willing to share journeys to work or to use car clubs.

It was when the Chairman began looking at developments in autonomous cars that he realised that the tectonic plates of vehicular travel were shifting and he set out to put the company at the forefront of those changes.

The Project started in early 2015. The first fruit of The Project was the development of a small online program to help clients manage their pool and company cars. A driver went online, said when they wanted to travel and the system allocated a vehicle to them. A simple client-specified algorithm optimised the cost and CO2 emissions of the journey.

In 2016 work started in earnest to expand the scope of this program dramatically, so that it could optimise not just the use of a finite group of cars but the travel choice for a whole journey. The mission was clear: if an employee wishes to travel from A to B they have multiple options available to them, including their private car, company car (theirs or a colleague’s), a car club car, train, bus, plane, private bicycle, public bicycle, taxi hire car or their own two legs. The system needed to deliver the lowest-cost, least emissions and the fastest journey, with the trade-off between these three variables being set in advance by the employer and any necessary payments (including fares, hire costs, tolls and parking charges) being taken care of automatically. The project involved connecting the company’s systems with multiple databases and proved to be incredibly difficult.

There were two problems. First, each database held data in a different way, so fields needed to be understood and mapped and there needed to be agreement between the various data providers not to change the use of a field without consultation. The second problem was reaching agreement with travel companies, airlines, hire companies and so on, each of whom could see the advantage in having a joined-up system – which came to be known as an ‘ecosystem’ – though many had to be persuaded to co-operate.

By early 2018 the company had cracked the major problems and launched Ecosystem One, the forerunner of Ecosystem Five that we have today.

The Chairman’s prescience was proved in 2018 when the government imposed strict pollution controls on cities, dramatically increasing the daily charges for all vehicles entering urban low emission zones. Suddenly companies stared looking for alternatives to the existing models of mobility.

2018 was also the year we launched Ecosystem Two. This allowed clients to tailor the system to their needs but also opened it up to anyone who wished to use it. We no longer had to go to businesses to pitch to win their business. If they wished, they could simply start using the system for free. We made our income by taking a small slice of the fares, hire charges, fees, parking charges etc levied by the suppliers of services. The Chairman had anticipated that Ecosystem Two would prove popular with private individuals as well as corporates, and of course he was right because it became the journey planning and booking tool of choice for a generation keen to get around as cheaply and effectively as possible.

Ecosystem Two also started taking data directly from connected vehicles and using it in a whole host of interesting ways, including for the first time making the decision about when a vehicle would be sent for servicing. By 2018 manufacturers had accepted that cars could monitor their own essential functions and could decide when they needed to be serviced. ‘Variable servicing’ had been in place for some years but this moved us up to a new level. Our maintenance controllers were still an essential part of our service, of course, especially as they could now interrogate each vehicle remotely to see what work needed to be done.

All of this of course was setting the path towards our integration with the autonomous taxis, which happened in 2019. Uber had been developing autonomous taxis since 2015 and, once they had managed to deal with all of the regulatory and insurance issues and were launched in earnest in 2019, we integrated with them. Deals followed with Gett, Lyft, Curb, Grab, Didi Chuxing and Ola, taking us for the first time into the USA, China, Southeast Asia and India.

When we launched Ecosystem Three in the UK in 2019 we became the first company to offer a full end-to-end journey service that included autonomous cars. Now in 2026 when most cars, many commercial vehicles and all taxis are operating autonomously, young people can barely remember the days when all vehicles had a driver. For them it is completely normal that when they book a journey using services such as Ecosystem Five, a driverless vehicle turns up, takes them to their destination then drives off to pick up the next passenger.

These developments of course shook the foundations of the motor finance and fleet leasing industries. As the need to operate fleets of vehicles declined, some motor finance and fleet leasing companies focussed exclusively on mission-critical fleets of cars and vans for the emergency services, delivery companies, service companies and so on – organisations whose mobility needs could not be met through the use of shared vehicles. Others have followed the lead we have taken and run their own fleets of autonomous cars. Whilst we are the market leader in the UK, with 270,000 vehicles, we do have smaller competitors snapping at our heels, some of whom didn’t even exist in 2016 and came along with solutions that disrupted the existing market.

In other countries we typically rank third or fourth and there are still many countries that have yet to embrace autonomous vehicles so we still have a lot of potential to grow.

Whilst Ecosystem is by far our largest division I must of course pay tribute to the great work being done by our Urban Realignment team which we set up only two years ago. They have just finished digging up their 25,000th domestic home driveway and replacing it with beautiful green landscaping. In 2016 few people would have realised that once all cars would no longer be operated by companies or owned by individuals there would be no need for domestic houses to have private driveways.

Urban Realignment have also recently won contracts to remodel the town centres in 12 urban areas, removing crash barriers, traffic lights dual carriageways etc. Now that cars always behave properly and ‘speak’ to each other there is no need to devote as much road space to cars or to segregate them so much from pedestrians: every car knows to stop if they see a pedestrian.

Urban Realignment have also just converted their 20th public car park into residential housing and are pitching for contracts to convert office car parks into either landscaped park or office space.

We are looking forward to 2027 being another record-breaking year.